This past Wednesday saw the Law Clinic hold its Annual General Meeting in the Graham Hills Building. It was attended by Clinic members old and new as well as friends of the Law Clinic and invited guests.

The AGM also saw our 2015-2016 Annual Report published. This can be accessed here. 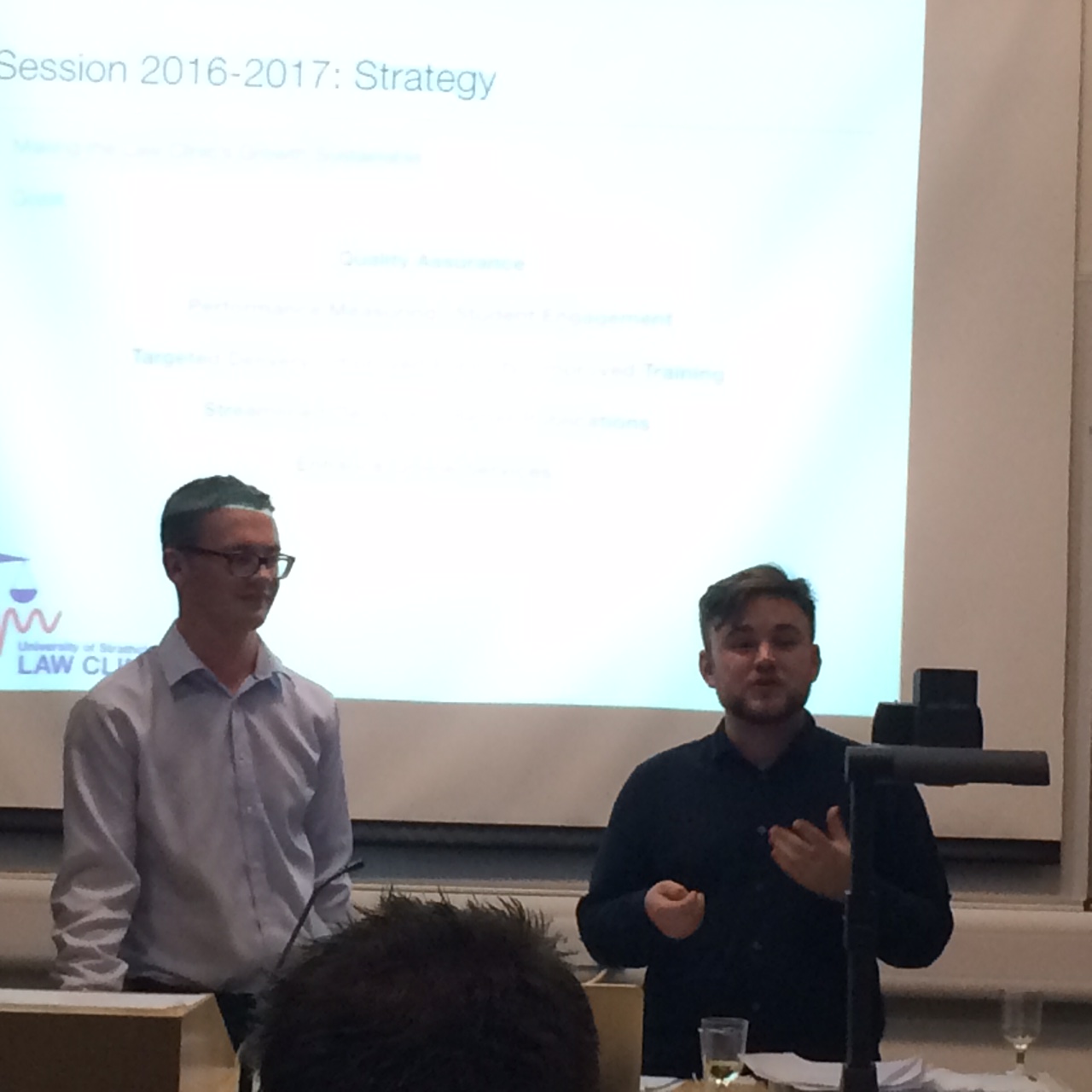 The AGM began with Law Clinic Director Donald Nicolson giving his annual report of the Clinic over the past year.  Donaldpointed out that over the past year the Clinic has dealt with 484 cases: an increase of 26.4%.  This increase was thanks to our three general advice services: Online Enquiries, Initial Advice Clinic Enquiries and traditional “Cases”. Donald then went onto share some of prominent success stories while project supervisors gave a breakdown of their projects, and the Student Directors outlined plans for the coming year.  Following these reports, elections to the Clinic’s Executive Committee were held with Thomas Jamieson, Alice Bowman, Jordan Bird, Jenna McKinley and Luke Light all elected to the Committee.

Following on from the election, the AGM then moved on to the night’s award ceremony.  The nominees for awards were all nominated by their fellow students. The first award of the night was “Best Newcomer” which was won by second year Graduate Entrant Nathan McHardy while Scott Jenkins won “Best Project Worker”.  The award for “Best Advisor” was shared between Ben Brown and Scott O’Connor.  The “Best Case” award was won by Andrew Harding and Hannah Grace for their sterling work on an employment case.  The Amanda Benstock Award for Compassion was won by Alice Bowman, while Stacey Martin won the Effie Shaw Award for Dedication.  Miranda Hughes won the Best Court/Tribunal Advocate.  The final award of the night went to Jennifer Rowlinson who won the award for her overall contribution to the Law Clinic over the past year.

“The AGM is a chance to celebrate our past successes as well as look forward to our future and the last year has been a year of massive success.  We have increased our membership to almost 300 members while we have been recognised at a variety of national awards and won a few as well.  Most importantly it has been a year of success when it comes to winning for our clients.  We had a case success rate of 85% which is truly remarkable.  We  want to build upon this record and improve it, which I am confident we will do over the next year.”

“I congratulate everyone that won an award and everyone that was nominated.  As these awards are based on students nominating one another, those who won and nominated are really thought of highly by their peers who work with them on a daily basis in the Clinic.”