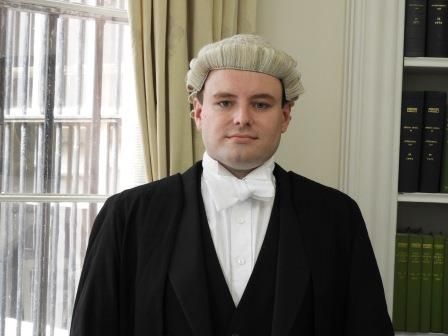 Going to the Bar was my plan ever since my first visit to Parliament House, just over a month after starting my law degree. The decision to pursue this career path immediately after completing my traineeship was perhaps an unusual one, but one which I do not regret for one minute.

Law wasn’t my first degree (I first studied politics) but after taking a few law classes as part of my politics degree, I knew it was what I wanted to do. I threw myself into my studies, volunteering for just about everything going (including the Law Clinic). I could not have asked for a greater experience. When it was all said and done, I had appeared in front of Sheriffs, Employment Judges, and even an English High Court judge (in the Employment Appeal Tribunal).

Next, I completed my traineeship at MacRoberts in Glasgow. Here I gained experience in a wide range of commercial litigation in both the Sheriff Court and the Court of Session, as well as in property and construction law. While litigation is important as an advocate, often it is the non-contentious matters that teach you the most about the inner working of a particular area of law.

The final step on my journey so far came in form of devilling. This essentially consisted of nine months shadowing my devilmasters, John MacGregor, Malcolm McGregor, and Thomas Ross. They took me under their respective wings, and ensured that I learned not only from them but from all the very best advocates in the country. Faculty is, after all, a very collegiate place.

I have learned a lot along the way from many people but I credit my time in the Law Clinic as the experience which shaped my views on the importance of access to justice for all. Yes, justice is the right of all members of society but too many barriers to justice exist for too many people. The Law Clinic works extremely hard to remove as many of these barriers as possible and it has been the greatest influence on me as a lawyer, a litigator, and an advocate.