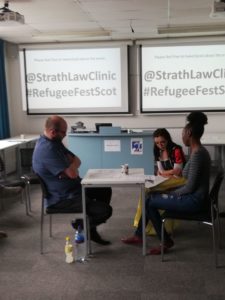 The well attended event was hosted by immigration unit coordinator, Hanan El-Atrash, and former student director, Fergus Lawrie.  The event kicked off with an introductory address to the guests and a general overview of the function of the Clinic and the role of the Immigration Unit. Following this was a dramatised version of a substantive asylum interview procedure, inspired by the genuine asylum interviews that clients of Strathclyde Law Clinic have undergone.

The performance showed the way in which Home Office caseworkers ask an asylum applicant questions about why they are claiming asylum, and the types of questions they are asked. This process can, in practice, take several hours, and the same questions often get asked in different ways.

At the Law Clinic event, this exercise was conducted through interactive forum theatre. This allowed the audience to stop and interact with the dramatisation as it progressed. This saw the audience deal with a variety of problems and misunderstandings that arose because of the nature of the interview process itself. These misunderstandings very often go on to affect the credibility of those seeking asylum and can lead to the rejection of an asylum claim even when the person is genuinely in need of international protection.

This difficult exercise was showcased by talented members of the Law Clinic, Immigration Unit Deputies, James Burns and Agata Soroka and Welfare Project Manager, Kuda Chinyani. They portrayed a version of the Grimm Brothers’ tale of Snow White, depicting a young German girl fleeing persecution from her home country and is forced to rely on the kindness of strangers to seek refuge in a neighbouring state. Whilst clearly fictional, this version of the story carried many of the hallmarks of a typical case that the Home Office would encounter.

The second half of the two-hour event highlighted information regarding the Destitute Asylum Seeker Service (DASS) project, and the role that the Law Clinic plays in that project alongside its partner organisations, which include Refugee Survival Trust, Scottish Refugee Council and British Red Cross. This talk not only drew attention to the daily problems faced by destitute asylum seekers across the country, but also how organisations like our Immigration Unit are committed to helping people deal with these issues. There was also a discussion on what more could be done to assist.

The event was a success and the Law Clinic was honoured to be able to contribute in the Refugee Festival Scotland 2018. The objective was to tackle myths and misinformation about those navigating the asylum process and to explain how many people end up living for years in destitution in the UK. Those who attended appreciated the opportunity to learn and to discuss the challenges faced by destitute asylum seekers, whose situation is often explained politically but rarely discussed factually.

Keep your eyes peeled for the next Immigration Unit Event on our social media pages.