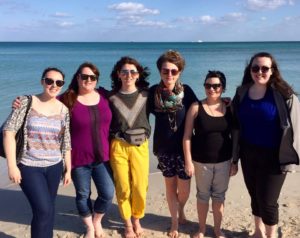 The image of Miami is one of glamorous beaches and fun. However, on our trip we learned that much of Miami is not really like this at all. Instead, poverty is evident almost everywhere. This is particularly the case in the area around the South Florida Aids Network, where we shadowed Miami Health Rights Clinic students at while they conducted client interviews. The clients we saw did not just have one legal problem; they had a whole host of related problems that made for harrowing listening. Even outside the hospital we were confronted with a whole community of homeless people, sleeping rough along the pavements.  We were informed by our student guide that this was in fact the ‘real’ Miami.

Heading back towards the Miami University campus, the differences with the area we had just visited as the houses are big, and the carparks are filled with expensive vehicles. Nevertheless, the students at the Health Rights Clinic are committed to using their time and resources to help bridge the gap in whatever way they can. Theirs is one of a number of clinics operated by the Law School and their remit covers not only advice in relation to accessing health care, but addressing the raft of other legal problems facing their clients.

There was a lot of thought provoking discussion about the similarities and differences between access to justice in Glasgow and Miami over the days which followed, and the students were encouraged to identify which particular issues they were most interested to explore further in research projects which later culminated in presentations on the return trip to Glasgow.

The students and supervisors were then given the chance to see the sights of Miami, and soak up the sunshine.  Saturday consisted of a guided walk around Wynwood Art district, followed by lunch at Wynwood Diner, giving the students the typical American experience.  Before heading to the farewell dinner, the exchange group spent time at South Beach and stocked up on some American candy to fill up their suitcases.  The students were able to enjoy Haitian food before bidding farewell.

Our hosts at the Miami Health Rights Clinic treated us spectacularly well, and we returned the favour whilst they were here during May.  After having arrived and settled in to their accommodation the group from Miami got down to exploring the city they would call home for the following couple of days which included a tour of Glasgow City Chambers as well as the Law Clinic and even joined in on one of our Executive Committee Meetings. We also attended a Ceilidh on the Friday evening so that they could experience something quite unique and on the Saturday they explored the West End taking in Kelvingrove Art Gallery and Glasgow University before heading to a BBQ at Kate Laverty’s home. Although the weather was not perfect this was a fantastic way to finish their visit and helped to forge stronger ties between both clinics.

We look forward to continued cooperation with our friends in Miami!