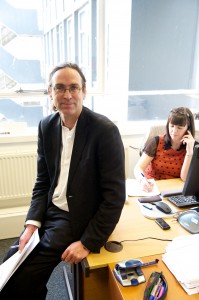 If I was not certain before, I am sure that the Law Clinic is now the biggest in the UK.

Indeed, after years of attending international law clinic conferences I have yet to learn of a bigger clinic anywhere in the world. Thanks to a legacy left to us by Robert Fernan Smith, we have now expanded to 274 student members, almost 100 more than we had two years ago.

Last academic year students have taken on over 257 cases, which, when added to the 199 clients advised at the Initial Advice Clinics, represents our most significant service to the community to date. All of this has been possible while maintaining our usual high standards, thanks to our supervisory capacity being doubled (from two to four supervisors).

This expansion has also allowed us to bed in the new Immigration Unit and Scottish Women’s Right Centre, both of which were launched last year and are now integral parts of our activities.

As usual, the Clinic never stands still, despite the perennial promise of a year of consolidation! Over the last year, we have developed two new ventures. First, we are now providing services more directly within the community by attending a housing shelter to help people with their social benefits and other problems. The second project aims to go beyond simply offering legal services to those of limited means and to help them to start their own business — putting themselves into the position where they no longer need our help.

This latter project was developed by Stacey Martin and Fergus Lawrie. Fergus was also instrumental in bringing a new form of training into the Clinic and for organising last years’ inaugural Miami exchange. For this he was the deserved winner of the Best Contribution by an Individual Student at this year’s LawWorks & Attorney-General’s Award. This was the fourth time in ten years that this particular award was won by a Strathclyde student and adds to the other three successes achieved by the Law Clinic at these awards – far more than any other law clinic. And just to prove we are not just the biggest but also the best, the year was capped by winning the Pro Bono award at the prestigious Scott & Co legal awards.

And so, after all this excitement, we launch optimistically into next year’s “consolidation”…