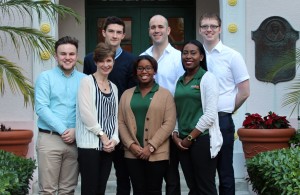 Tired and hungry, four student advisors from the University of Strathclyde Law Clinic arrived at Miami International Airport. Accompanied by one of their supervisors and the Law Clinic’s academic director, they traveled not in the search of sun, sand and sea, but in order to take part in the inaugural law clinic exchange with the University of Miami’s Health Rights Clinic.

The purpose of the exchange was broadly speaking twofold. Firstly, the students gained an invaluable first-hand insight in to issues surrounding the provision of access to justice in another society. Paired with four student advisors from the clinic in Miami, they accompanied them to different locations where they met with prospective clients to conduct initial interviews. Whilst the Health Rights Clinic centres on providing access to the healthcare system (which is privatised in the United States) for low-income patients, most of whom are from immigrant communities, the key to accessing healthcare for many of the poorest people in Miami, is linked to their immigration status.

On a practical level they were able to compare the differences in the way the clinics operate, such as the difficulties that arise in the Miami clinic in representing clients from such a variety of backgrounds, particularly the language barriers. This is particularly important as the University of Strathclyde Law Clinic prepares to launch its innovative immigration project assisting destitute asylum seekers here in Scotland.

Most striking for the students, however, were the disparities in access to healthcare and justice in the United States as Drew long, a student advisor currently studying toward his Diploma in Professional Legal Practice, observed. “I was really taken aback by the differences between Scotland with its near-universal access to medical treatment and the US system with its substantial deficit in service that is rooted in poverty.” Seeing such injustices has strengthened the students’ passion to continue providing access to justice for all at home in Scotland through their work in the Clinic, particularly as the provision of legal aid in civil matters is coming increasingly under threat.

Secondly, this exchange involved each Strathclyde student pairing up with a student from Miami to start work on projects that will comprise of a comparative study of ethical issues that arise from working in both clinics. The hope is that will help develop strong links between the two programmes and an academic portfolio, which will help future students to better understand their clinical work and improve practice. “It will be very interesting to see the discussion of ethical issues which arises out of their different experiences of working in a law clinic” said Donald Nicholson, Director of the Strathclyde Law Clinic and professor at the Strathclyde Law School. “I am very excited to see what the students come up with.”

The Strathclyde students were given tours of the Little Havana and Little Haiti, the Cuban and Haitian communities in Miami that make up a significant proportion of the immigrant community in South Florida. They sampled Cuban pastelitos and cortaditos at the infamous Little Versailles and met Marliene Bastien who founded the inspirational Haitian Women of Miami organisation that provides direct support and advocacy services to the Haitian community.

As the students embark on their projects, preparations get underway for the Miami students’ arrival in Glasgow in May, where they will experience life in a law clinic on the other side of the pond. Whilst what will be revealed in the academic explorations into clinical practice and ethics is unknown, what is certain is that an invaluable working relationship has been firmly established between the law clinics at Strathclyde and Miami. Indeed, the experience for everyone involved has been invaluable and eye-opening.

Long may these ties continue to flourish.