We look at the progress of our projects over the last year.

You can skip to the Small Business Law Unit, the Housing Project, the Online Project, the IACs, the SWRC, the Prisons Project,  the Immigration Unit or the Criminal Convictions Unit. 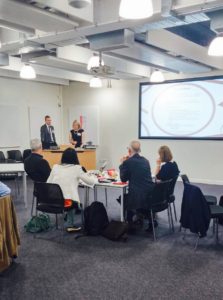 The SBLU aims to provide legal advice to individuals starting up a new business, small businesses, social enterprises and charities who cannot otherwise afford this advice. It will focus on providing advice in areas such as employment, commercial and contract law through the use of information sessions, workshops, business Initial Advice Clinics and bespoke client services.

We hope that through providing these services, we will help empower community members and encourage the individuals behind these businesses to enforce good business practices and make their business a success, thus helping not only the individual served, but also their employees, customers and the local community.

Although the idea for the project was only developed over last summer, we have now entered the pilot stage, with the aim to launch in September 2016. On the 21st June 2016 the Unit held the first Business Law Bootcamp which provided information on a range of legal areas and which had a fantastic turnout and received great feedback.

We have also been very fortunate to have support from the existing business network in Glasgow and other Business Clinics throughout the UK, such as QLegal, a part of the legal advice centre at Queen Mary’s University in London, and the Student Law Office at Northumbria University. These organisations have provided us with insight into business law and practices, for which we are very grateful. We would also like to extend our thanks to DLA Piper for their external supervision and presentations during the Bootcamp and their continued support of this new project.

With so much support and the help of dedicated students, we are looking forward to seeing the SBLU grow over the next few months and provide access to justice to new clients!

The Housing Project has forged ahead in its mission to educate people on housing rights.

We have been working together with the Home Owner Housing Panel (HOHP), which identified that some homeowners were having difficulties in completing their applications to launch complaints about their Property Factor. The Project is in the process of setting up drop in sessions where Members will assist homeowners in completing their application. We have worked hard in recent months to put together a comprehensible presentation which can be delivered at these meetings.

Our Online Project has continued to increase our provision for clients who are perhaps unable to come in to the Law Clinic or reside in rural areas which would make it difficult for them to travel. We currently have 40 advisors involved in the project. In the year to July 2015 we managed to advise a total of 107 clients, and from that date another 123 clients.

Recently, one of our alumni and the instigator of this project, Andrew Ross , has volunteered to provide remote supervision of cases from his new job at Burges Salmon in Bristol. This is a model we hope to expand, and if you would like further information plus get in touch to discuss the possibility.

Once again, we are thrilled with the continual growth of the Law Clinic’s Initial Advice Clinics (IACs).

Acting as a crucial branch of the Law Clinic in reaching the wider community, our dedicated volunteer solicitors continue to provide on-the-spot legal advice at drop-in sessions in the evenings. IACs run on the first Wednesday of every month at the Mitchell Library and on the third Monday at the University of Strathclyde Law School.

To learn more about the IACs, or to get involved, please get in touch by contacting enquiries@lawclinic.org.uk.

The Scottish Women’s Rights Centre is a collaboration between Rape Crisis Scotland, Legal Services Agency and the University of Strathclyde Law Clinic. The Centre offers free and confidential legal advice and information to women who are survivors of gender based violence whilst the helpline first launched on April 22 2015 and has run every Wednesday since. This has now expanded to include a Tuesday evening.

The project has also successfully been operating legal information surgeries run by a solicitor from LSA at two Rape Crisis Centres.  A Glasgow surgery works in partnership with the Support to Report project and runs on Mondays from 10am-1pm. A Lanarkshire surgery is based in the Lanarkshire Rape Crisis Centre working in partnership with the North & South Lanarkshire Violence Against Women Partnerships and runs on Thursdays 10am – 1pm.

Both of these services are free to survivors and operate on an appointment basis. They offer a great opportunity for survivors to have one-on-one contact with the Centres solicitor and support services are on hand to offer assistance if needed. Law Clinic volunteers assist the solicitor at these drop in sessions by taking notes, thus gaining a great experience in expanding their knowledge of how to deal with survivors of gender based violence.

In February 2016 the Prisons Project gave their first presentation to offenders since 2013!

In 2013 the project faced significant challenges due to new policies being imposed by the Scottish Prison Service. After in-depth discussions with HMP Low Moss throughout the following year, it was agreed that they were willing to waive the requirement for disclosures to be carried out in exchange for the students involved undertaking a training programme within the prison.

The first presentation took place on 26 February and since then presentations have been taking place on a weekly basis. We now present on the topic of the employability of offenders – focusing on the Rehabilitation of Offenders Act 1974 – and joining the armed forces with convictions. Both topics have received positive feedback from offenders and prison staff. We are hoping to expand into other prisons, most likely Greenock next, as well as undertaking new topics including Housing Rights and Rights to Benefits in the coming weeks.

The project is offering an excellent opportunity to get involved in a unique area of law and to work with people who really need our help and support, while also giving providing students a fantastic research opportunity that gives them insight into how those with convictions struggle to reintegrate into society.

The Immigration Unit was launched in the second half of the 2014-15 academic year and plays an important role in challenging failed immigration and asylum cases.

Refugees are often refused asylum by both the Home Office and at appeal even though they have a well-founded fear of persecution in their country of origin. There are many reasons why this may happen; however, once they are in this position, they are extremely vulnerable as they are no longer entitled to even minimal state support and often become destitute. It can also be difficult for them to gather fresh evidence in support of their cases.

In response, the Law Clinic’s Immigration Unit is working in partnership with the Refugee Survival Trust and the Scottish Refugee Council on a project to assist destitute asylum seekers who have been refused asylum to gather new evidence in support of their cases as A first step towards putting in a fresh claim for asylum.

To this end, it has recruited a total of 20 members who have received training from Freedom from Torture, an organisation that offers counseling and other vital support to torture survivors and those working with them. Since July 2015, when the Immigration Unit received its first referral, there have been 43 successful referrals to the Law Clinic from the Scottish Refugee Council and in each case, the referred asylum seekers have been given detailed advice in relation to the type of evidence needed to support fresh applications for asylum, as well as assistance to obtain such evidence where they meet the Law Clinic’s criteria for help as a client.

The Immigration Unit will soon pilot a monthly immigration advice clinic at the Lodging House Mission where English for Speakers of Other Languages (ESOL) classes are conducted.

The Criminal Convictions Unit (CCU) began the new academic year with a record number of cases (five in total) and project members, and project expansion continued as expected as a consequence of overall Clinic expansion.  The Presumed Innocent Network (PIN), a collaborative effort involving the CCU, Abertay Justice Project (AJP) and the Miscarriages of Justice Organisation (MOJO), promises to continue to fill the demand for cases created by the growing supply of project members ready and willing to engage in potential miscarriages of justice investigations.

The CCU hosted two exciting training sessions in semester 1.  The first was conducted by the Scottish Criminal Case Review Commission (SCCRC), role is to review and investigate alleged miscarriages of justice. This session has provided an invaluable insight into the investigative techniques of the SCCRC for two consecutive years now.

Dr. Richard Adams and the Miscarriages of Justice Organisation (MOJO) conducted the second session.  Dr. Adams is a Chief Inspector at Police Scotland where he is the Head of Policing Values and Human Rights. This was a great opportunity to hear an influential member of Police Scotland provide information on the value-based approach adopted by Police Scotland in their investigations.   Following Chief Inspector Dr. Adams, MOJO brought along an ex-client to recount his experience as a victim of a miscarriage of justice.  Hearing his experience served to humanise the process miscarriages of justice victims must go through, and allow unit members to witness first-hand and appreciate the potential effect their efforts might have in turning peoples’ lives around for the better.

The CCU is also pleased to announce that an exciting and long sought after collaboration with the university’s forensic science department has finally been implemented.  A select few of the University’s MSc forensic science students will be given the opportunity to become involved in CCU cases where forensic input is required. This collaboration is an exciting addition to the project and one that is sure to provide a fresh perspective on investigations in an area of expertise law students are not fully equipped to grasp.