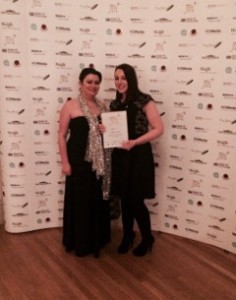 On the 24th of March, the Law Clinic won the Pro Bono award at the Scott and Co Legal Awards 2016, seeing off tough competition from The Glasgow University Caledonian Law Clinic, RBS and its long-running sponsor DLA Piper, who were highly commended.

The award was presented at a ceremony at the Assembly Rooms in Edinburgh, and, in giving the award, the judges stated that they were specifically impressed by the wide range of work undertaken by the Clinic and the interesting new projects we have developed over the last year.

On receiving the award, Donald said: “After being highly commended last year, to win this year’s pro bono award was a very gratifying and justified reward for all the hard work by students and staff. This last year has seen amazing progress in increasing the cases we take on, and in launching new projects such as the Scottish Women’s Right Centre and  an Immigration Unit to help destitute asylum seekers. I have no doubt next year will be even better as we look to further increase student and case numbers, and launch a Small Business Law Unit.”

Whilst being nominated for, or winning, awards does not factor into the Clinic’s decisions about the services we offer, it is nevertheless gratifying to receive recognition from the Scottish legal community for the work that we. It certainly makes it worth it for all those who give up so much to help others and also help us expand and offer new services to those who need our help the most.